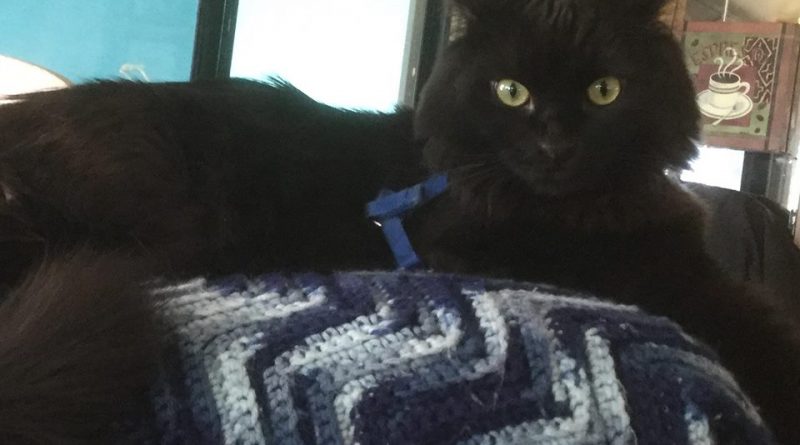 It was early April 2017. Tony and I were driving from our apartment to the RV Storage lot in Puyallup to do some work on the motorhome in prep for our full time launch in July. I’m speeding down 167 at 65 MPH and Tony says, “Do you hear a cat?” I replied, “Are you nuts? We’re on the freeway!”

We arrived at the destination – 25 miles from our apartment. I lowered the window in the Yukon to enter my security code. I heard it. A very faint “mew mew” and immediately shut off the engine. I opened the hood fully expecting a horrid scene, but I didn’t see anything. We then heard “mew mew” again and finally I saw two little eyes peering up from the only place he could have survived – between the steering gear box and the motor mount. Tony crawled under and got him out.

The Stow Away Kitten 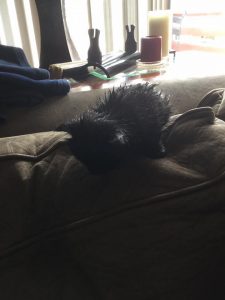 I figured he had to be about 2 1/2 weeks old. His eyes were open, but his ears were not up. He “wobbly walked.” We immediately took him to the coach, fired up the generator and heater, and wrapped him in a towel.

Tony held him while I ran to Tractor Supply, bought kitten milk and a bottle.
The next month he spent living on my bed where I could feed him, train him, make sure he was safe, and kept from the other cats until he was old enough to get his shots.

We figure a local feral cat had kittens and she had put this one under the truck to stay warm and dry. We couldn’t find any sign that she had placed others there.

A New and Safer Adventure

Kisses took his next trip in the Yukon down to Portland later that month when we went to get the new Toad hitch. He was still too young to leave alone.

He then went with us to Leavenworth last Memorial Day on our shakedown trip. He was an old hand at this RV living before Lovey and Midnight got aboard in July!

And that’s how we got him. 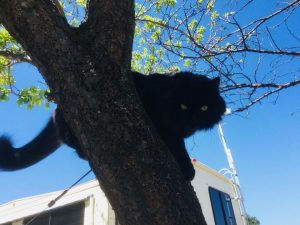 Thank you David Edman, for sharing this wonderful story.

Read in our Community Stories – May to see how Kisses got his nickname of Put-Put.